Today is my mom's birthday. I want to send a shout out to her. I love and miss her so much! Happy birthday Mom!

I finished my second semester at school and this was the first semester I took a full load. I took five classes and just got my grades back last week. Four A's and one B. YAY me! I'm kicking myself over the B, because it would have been an A, but with Thanksgiving weekend I forgot to take two online quizzes and that brought my grade down a lot. One of the classes I took this fall was Environmental Science. It was a shortened class packing 16 weeks into 10, it was a class I found very challenging and also had a lot of disagreements with my teacher on some public opinion things. I was just hoping to pass the class and didn't hope for the best grade. I was very surprised to find that I'd not only earned an A, but also that only one other person did better than me on the final exam, and everybody else scored less than my 92%! That felt really good.
I am taking four classes the next semester and they all start the first part of January, so I'm hoping that my load won't be as heavy as this last semester was. I am taking an introduction to Special Education class that I am very much looking forward to. This, I am hoping, will help me sort out which range of kids I want to work with. My education will not be all encompassing and at one point I will have to choose between:
a- development and physical disabilities
or
b- learning and emotional behavior disabilities
I really wanted the development and learning, but the school has them split up, so at some point I will have to choose one or the other. At this point I am leaning towards choice a, but I think Jaeden falls in choice b, and I was hoping what I learned would help me help her. During their Jr. High years I am hoping to home school at least the girls, if not Josh too (he's already begging me, but I think he just thinks it's an easy ride).
Buddy is doing a little better. He's learned his name. He's still biting the kids a lot. For the first few weeks we would close his mouth and scold, "no biting!" But that didn't work. He is very mouthy, chews, bites, eats everything. He's just a puppy and learning about the world, like babies do, putting everything in their mouths, but he should be past that stage by now. So now we are shaking his scruff while we scold and pinning him down on the ground until he submits, which he does, but it's not stopping the biting yet. I really need to take a video of Joy disciplining him, it's kind of hilarious, she's such a brute. Josh and Jaeden are much more timid and afraid of his biting. So far it's not hard biting, but it needs to be stopped before he gets older and his grown up teeth come all the way in.
We had a good Christmas. The children traded presents from Joel and me for the puppy, but we did get them a couple of things, and of course Santa stopped by and spoiled them too. I got a really comfy computer chair that I am loving sitting in right now.

Jake had his wisdom teeth out on the 23rd and is still on ibuprofen, but he seems to be healing pretty well and hasn't shown signs of dry socket yet. I got that the last time I had a tooth removed and I'd rather have pushed a baby out than go through that again! It was the worst. His face hasn't swollen up too bad either. Tomorrow it will have been a week. I hope this is the last major thing his body goes through. He's had so many broken bones and teeth removed and braces and such. It's time the kid got a break!
My preventative medicine for migraines seems to be working really well now. I hardly ever have to take Excedrin. I am so happy! I was in so much pain before, every day. I do think the pills make me more tired than usual, but I'd rather deal with that, than be back on so many pain meds. Also my stomach is much happier.
Entry by Jen 1 comment:

One more week of classes and then winter break. YAY! And also bah! Although I'm happy to have some of these classes end, I'm a little sad to know some people I've met, I may never see again. Every class I have I have made a friend and wish that I could have more classes with them. One gal, in my psychology class is so cool. She's a little older than I am (and how sad I am to know that I'm going to be one year closer to 40 next week, boooo!) and she totally reminds me of Sarah Palin, only smarter, and a lot less annoying. I'm going to miss her.
This is Reiley, she let me take her picture last week when we were performing a water/acid rain test. My stupid Blackberry takes horrible pictures (I'm spoiled by my Canons), but I think she looks adorable, anyway. 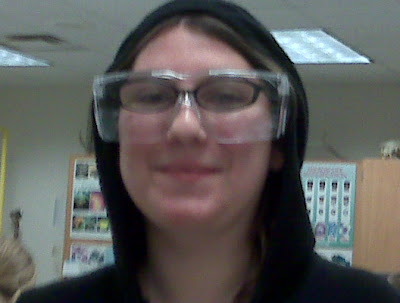 She's in my biology class.
Speaking of turning 39.... I never, ever, ever thought I would live this long! Seriously. If some of you know me, and some of you do, you know that for many, many years I was not living in a way that was kosher with living a long happy healthy life. I know I'm getting older, and this week I was reminded that my eyes are getting older too (stupid biology project), but I still feel like my mid 20's and so it's really hard for my mind to grasp my actual age. I mean, it's not a big deal to me, but it's still a mind boggler.
Buddy is still living with us. He's a chewer and a biter. I'm finding myself hooking him up to a long leash for hours every day and controlling every move he makes. The vet said I should do that, that he should be in puppy boot camp and can't make a move without my permission. That's what I'm doing. So far he's mastered "sit" and a little bit of "stay" and "lay down". And he's totally mastered the kisses and cuddles. I need people to come over so I can socialize him and make him sit nicely when people come in the house.
Entry by Jen 1 comment: